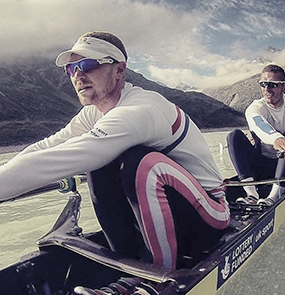 Alex has lived a life where the routine was embedded and ingrained in everything he did. From the youngest age, he competed in sport, not because he was made to, not because he particularly loved sport, not because he is highly competitive and loved to race - no. It was just what he did. Swimming turned to rowing, culminating in 2 Olympic Gold medals, a world best time, 5 world championship titles and most importantly, 3 children. Routine was gone. Alex is an inquisitive person, interested in people and things. He has always wanted to see life in a different way. Taking his place on board a pioneering Arctic rowing expedition was a dream come true. Alex and the crew explored the Arctic Ocean, rowing further North than anyone ever before. They hit weeks of bad weather and nearly didn’t come home. They became stranded on one of the most remote islands in the world, finally returning to civilisation after having the most extraordinary experience. Alex hopes to have more adventures in the future.

Experience rowing at the world’s premier rowing club. This is an environment boasting sporting excellence and the development of world-class athletes. There is no better place to experience the sport and through one of the heroes in the sport himself, Alex Gregory.