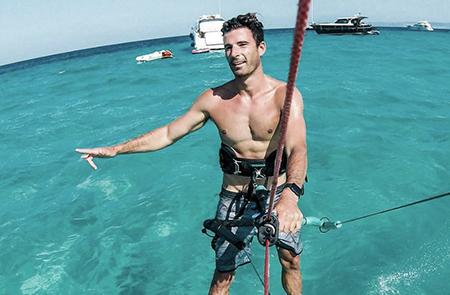 Alex was just 8 years old and his father bought him his first personal windsurf equipment. He was living close to Tarifa and that’s where he spent most of his free time. In the year of 2003, he started kitesurfing. Together with his brother, he took a few kitesurf lessons and afterwards they bought their own equipment for practising more. They practised every day until they had to go back to Málaga. The following summer (2004), they came back to Tarifa and started kitesurfing every single day. Alex made amazing progress and succeeded to get his first sponsor. At the end of the summer, they didn’t want to go back to Málaga, they wanted to spend the winter in Tarifa and so they did. This was the year Alex started competing. He participated in his first competition, in Tarifa, and he won it. In 2006, he started to participate in the PKRA in Tarifa, Cabarete and Fuerteventura, but he just placed 13th. In 2007, he was in his last year of school, so he didn’t have a lot of time to prepare himself for the competitions. Once his school year ended, he went directly to Cabarete and got 9th place. He was really happy with the result. When he returned from Cabarete, he spent the whole summer in Tarifa training every day up to 5 hours and was really motivated to progress. This brought him a good result in the competition in Fuerteventura, where he got 3rd. Afterwards, he went to Germany, where he didn’t succeed to get a good result and then to Brazil, where he got 2nd and beat the TOP riders of the championship. This was the moment where Alex convinced himself to participate in the world championship in 2008.