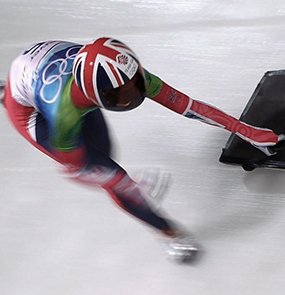 Amy Williams, the girl whose gold-medal-winning skeleton race at the Vancouver Winter Olympics in 2010 projected her into the public view overnight. As a student in Bath and a track athlete in the local club, she took her opportunity in the summer of 2002 to try-out the newly-installed bobsleigh and skeleton push-start training facility at Bath University. Wanting a chance to represent her country in an Olympic sport, she readily accepted the invitation to join the British Skeleton development programme and began to learn the art of sliding. In 2005, she was 2nd in the World Student Games and the World Junior Championships and she won the silver medal in the World Championships of 2009, along with several other World Cup medals. During the four years leading up to the 2010 Vancouver Olympics, she was completely focused on earning the right to represent Great Britain at those Winter Games and she achieved her ambition by winning the Women’s Skeleton event.