Aritz Aranburu is a Spanish professional surfer. In 2008, he was ranked among the ASP Top 45 after having won the 2007 ASP European Title. In 2007 he was named "Best Basque Sportsman". 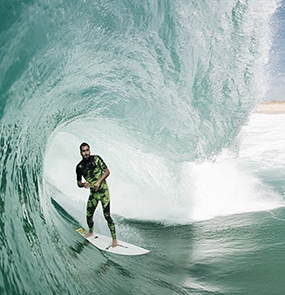 "Surfing has been my biggest passion since I was 3. Since then I have spent my entire life trying to surf the best waves around the world."

Aritz Aranburu is one of Europe’s most talented surfers and Spain’s number one surfer ever. He is globally known for being a former World Surf League competitor and for his documentaries showcasing his adventures around the world in search of the best waves. Aritz is the founder and director of Shelter Surf, home for all those who would like to have the best surfing experience, no matter the level and age.


Surfing with Aritz Aranburu on the Basque Coast, Northern Spain

The Basque coast, otherwise known as the Mecca of surfing in Europe. The Basque Country with unrivalled coastline 200km in length, is an important surfing hub and a European and global centre of surfing activity. It hosts some fifty surfing championships and world-class international events. The waves and conditions on the beach vary with the different areas however Aritz Aranburu will take you to private beaches promising the best waves without the crowds.