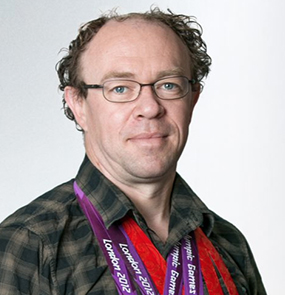 "Whether it is whizzing around the velodrome or enjoying a road ride, I find cycling is the best way to enjoy an adrenaline burst. There is lots of that to be had in my main discipline of tandem sprinting! Either it’s getting on the track for the first time, experiencing the thrill of the tandem or riding for pleasure overseas, I am passionate about giving as many people as possible, the opportunity to enjoy cycle-sport."

Barney Storey MBE is the world’s most successful sprint tandem pilot with an incredible 3 Paralympic Gold Medals and 6 World Titles. Following London 2012, Barney spent time as an endurance athlete before launching a women’s cycling team to support Sarah in her comeback from the birth of their daughter Louisa in 2013. At the London Paralympic Games in 2012, the biggest Paralympic Games in history, Barney and his stoker Neil Fachie came away with a gold medal in the 1 Kilometre Time Trial, winning it in what was then an incredible new world record time of 1:01.351, beating the previous record by almost a second. They also won a silver medal in the thrilling Tandem Sprint competition, losing out only to their GB team mates Anthony Kappes and Craig Maclean. With both tandems on fire at the London Games, this exciting battle was a particular favourite of the 6000 spectators. In 2008, Barney won double gold at the Beijing Paralympic Games with his stoker Anthony Kappes and in winning the first also lowered the Tandem 1 Kilometre world record to 1.02.867, half a second quicker than the previous mark. The 2nd gold came in the tandem sprint event and after qualifying fastest in the Flying 200m Time Trial, Barney and Anthony beat the Australians 2-0 in the final. All of this came just 3 weeks after a high speed crash in training where the front wheel of the tandem punctured and Barney had to bring the bike under control from a top speed of 70kph. Although avoiding any major injuries, the pair still had to contend with Anthony’s fractured right shoulder blade and Barney’s shoulder and neck soft tissue damage, as well as the loss of a considerable amount of skin! In the years building up to the Paralympics in Beijing, Barney won double gold in the same two events, Tandem Sprint and Tandem 1 Kilometre at both the 2006 and 2007 World Championships. All this was backed up with gold medal success at the Paralympic World Cup’s, National Tandem Sprint Championships and many solo bike events used to enhance his training for the tandem events. Following on from Beijing, Barney won double gold at the Track World Championships on the tandem in 2009 with Neil Fachie. They lowered the Tandem 1 Kilometre world record to a 1.02.217 and went on to beat a Spanish pairing 2-0 in the final of the tandem sprint event. 2010, 2011 and 2012 also saw Barney taking his 4th, 5th and 6th National titles on the tandem at the National Tandem Sprint Championship. In 2010 and 2012 it was with Neil Fachie whilst in 2011 with Anthony Kappes.