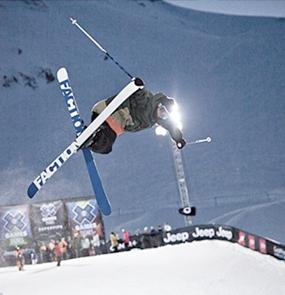 "I just love to be on my skis. Skiing with my friends, going out into the mountains, being surrounded by nature and skiing some powder. That's the best thing."

Candide Thovex is a French professional skier, known for his creative freestyle skiing movies. He learned to ski before the age of three in the Aravis region of the French Alps. As a four-year old, he began building little jumps behind his house, and at five he joined the local ski club where he developed a passion for Mogul skiing. He was fourteen when he won his first French National Junior Championships in the mogul division. Clearly, even from a young age he was “skiing with flair and innovation. He first caught the world’s attention by jumping Chad’s Gap, a massive transfer jump of 120 feet from take-off to landing over a 40 feet deep gully in Alta, Utah, US. With multiple Freeride World Tour and X games medals to his name, Candide is now considered to be one of the best freeskiers in the history of the sport. Together, you can explore skiing in the hardest to reach corners of the planet, whilst brushing up your freestyle skills at the same time.