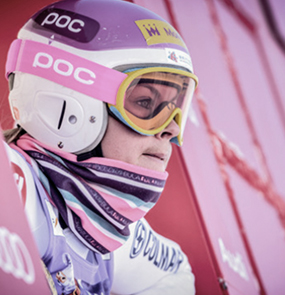 "I think just follow your dreams. I’ve always followed my dreams and this is what I want to do."

As a 4x Winter Olympian, a career-high ranking of 8th in the World, 7x British National Overall Champion and the only British female skier to ever win a run in a World Cup, Chemmy Alcott is widely regarded as one of Britain’s greatest ever skiers. Since retiring from competing on the world stage after The Sochi Olympics in 2014, Chemmy has immersed herself in the world of TV & media, where she now presents for the BBC on Ski Sunday and commentates on the World Cup Ski Series for Eurosport amongst being a guest on many other shows. Furthermore, she competed in ITV Dancing on Ice in 2012, where she finished 5th. In 2018, Chemmy became a well-loved BBC Winter Olympic Sports Commentator. She was enthusiastic, empathetic and gave a unique insight into the games that only someone who has been through the experience as an athlete could give.