Dame Laura Davies is a winner of no less than 87 tournaments worldwide, including 4 major championships and now 2 senior major Championships. She is a member of The World Golf Hall Of Fame and has played in a record 12 Solheim Cup's, also holding the record for the most points scored by any other player in the competition. Laura was made a Dame by Queen Elizabeth 11 in 2014 for her services to golf. 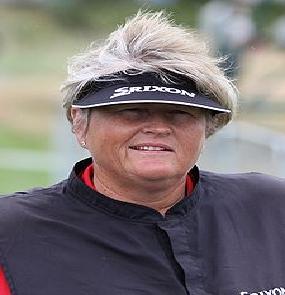 "Golf has been my life, I love this game, and I especially love competing and winning, but I also like to smell the roses along the way."

Laura Jane Davies was born in Coventry England in October 1963. Her family some years later then moved to Surrey in England, near London. Laura then spent a period of around three years living and going to school in Marietta Georgia USA, her parents having moved there in 1968 with her father's job as an engineer for the Lockheed Aircraft Corporation. Laura hit her first ever golf shot at Corby municipal golf club in Northamptonshire in England at the age of around 10, playing with her father and elder brother of two years. As her brother remembers, her first ever shot was airborne, much to the amazement of dad and himself. She first started playing golf on a regular basis a year or so later by tagging along with her brother and his friends and she soon learned that in order to keep up with them and have any chance of competing, she needed to hit the ball quite hard, a trait that was to become her hallmark. During the school holidays back then, Laura's mum would drop both her and her brother off at Sandown Golf center in Surrey on her way to work and the pair would play the 9 hole par 3 courses literally all day until 5 pm when mum would pick them up on her way home. They would compete hard and this went on for some years, with weekend golf on the menu too before the pair made the big step up on to the proper 9 hole course, at St Georges Hills in Surrey. Laura was by now beating her older brother (a single figure handicap) on a regular basis. Laura's brothers thoughts eventually turned to football but she was by now hooked on the game of golf and spells followed at both Guildford Golf Club in Surrey England and then West Byfleet Golf Club again in Surrey, where she was to meet the person she gives credit for influencing her career the most, club professional at West Byfleet David Regan, who only very recently retired in 2016. Dave instilled in Laura fundamentals that were to serve her well right throughout her career. Laura turned Pro in 1985 winning the Belgium Open that was to launch a career on the LET Tour now spanning over 30 years. She was to win the Ladies British Open at Royal Birkdale in 1986 and trips on to the LPGA Tour in America followed, resulting in her amazing victory in the US Women's Open in 1987 at Plainfield Country Club in New Jersey, with her brother caddying and father Dave, cousin Matthew and good friends Anne and Ken Reeves in the gallery watching it all unfold. She was to hold both titles at the same time, a feat no other player has been able to replicate as of yet. The Ladies British Open wasn't a major in those days but she was to add three further major championship wins to her US Open title, twice winning the LPGA Championship in 1994 and 1996 and also the Du Maurier Classic in Canada (a major then) in 1996. Along came the Solheim Cup in the early '90s, which Laura a staunch patriot reveled in representing England and Europe and she was to play in 12 consecutive Solheim Cups. She tells a great story about the first-ever Solheim Cup at Lake Nona in 1990, with her and her foursomes partner Alison Nicholas standing on the first tee in the first ever match having arrived before their opponents, the pair were discussing the fact that they were very nervous, to say the least, when Laura piped up, "" don't look behind you now then Ally cos here come Nancy Lopez and Pat Bradley, they did, however, go on to beat the formidable American pair 2 & 1 in that first ever match. Fast forward playing wise to right now and Laura is a winner of an amazing 87 tournaments to date Worldwide and at over 50, to her age truly is just a number, as she continues in her relentless quest to win golf tournaments around the World and is still striving to contest in further Solheim Cups. One of Laura's proudest moments of her entire career came only very recently, in being made a Dame by the Queen in the 2014 honors list"