British road and track racing cyclist and former swimmer. She is a multiple gold medal winner at the Paralympic Games in both sports, and six times British national track champion. Her total of fourteen gold medals makes her the most successful female British Paralympian of all time. 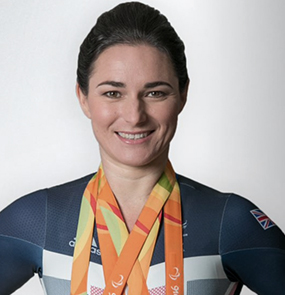 "Cycling is my second sport after swimming for Great Britain for 14 years as a teenager and throughout my twenties. It has been amazing to become so fully immersed in a sport that is now a way of life. Cycling to get from A to B is my favourite way to get around. I love sharing my love of cycling with others and introducing them to events and routes that they will also find enjoyable. Whether at home or overseas, cycling is definitely the best way of getting around."

Dame Sarah Storey is Great Britain’s most decorated female Paralympian in history having won 14 Gold, 8 Silver and 3 Bronze medals across an impressive 7 Paralympic Games. There is also no doubt she is one of the most versatile athlete’s in the World having won World and Paralympic Gold medals for her country across two sports [swimming and cycling] and across 12 very different events [6 in the pool and 6 on a bike]. In an international career that has spanned more than 24 years, Sarah Storey has a unique and inspiring story, not least because she has also won some of her gold as an able-bodied athlete. In London 2012, at the biggest Paralympic Games of all time, Sarah topped the medal table for the British team with 4 Gold Medals from 4 events. Following these Games Sarah took a break from racing to have her first child, and returned to action with a World Record at the 2014 World Track Championships, eclipsing the time she set to win her first gold medal in London! The impressive comeback set Sarah up for an unprecedented build up to her 7th Paralympic Games in Rio during which time she was the first woman to attempt the UCI Hour Record since the previous mark was set in 2001, she won a stage of the Tour de Bretagne, 4 Para-Cycling World titles, a bronze in the National Time Trial Championships and the able-bodied National Points Race title, all inside the first 15 months after the birth. Setting up her own cycling team and taking it to UCI level in 2016 ensured the perfect build up to defend her Paralympic crowns in 2016. During the Games her dominance of the C5 class continued and she collected 3 gold medals in Rio, extending her margin of victory from each event in London, including a sensational world record in the 3000m Individual Pursuit where she rode to a 3.31.2 Just over a year after the Games in Rio, Sarah gave birth to her second child and again returned to competition, winning 2 Gold medals at the 2018 Road World Championships just 9 months later. With her sights now firmly set on Tokyo in 2020, her 8th Games, Sarah could become Britain’s most successful athlete and would certainly rank her as one of the longest serving to British sport. This work adds to her current position on the UCI Athlete commission where she also works in a voluntary capacity to try and improve the athlete experience by contributing to the continued development of the sport. When asked about her secrets of success Sarah has always been a firm believer in continually challenging herself and changing the stimulus of racing to remain fresh and ready for new talent coming in to the sport.

Ride through the famous Timanfaya National Park, also known as the Fire Mountains. Incredible rides through the dramatic volcanic landscape, climbing to Mirador del Rio for cliff top views across the island of La Graciosa. You will also have the opportunity to join Sarah on the steeper climbs to Femes and the El Golfo loop, with decedents that sweep close to the ocean.