Professional golfer from Northern Ireland who has won 21 tournaments worldwide on a number of golf's main tours, including the European Tour, the PGA Tour, the Sunshine Tour and the Japan Golf Tour. 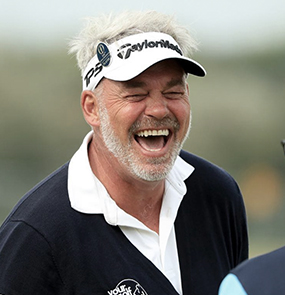 "What first inspired me is that it was me against the golf course. Golf appealed to me so much and because of that, that's why I fell in love with the game. I've had a love/hate relationship with it ever since."

Darren Clarke is one of the world's most recognisable golfers and has won many fans around the world with his friendly nature and dedicated approach to the game. The finest moment of his distinguished career came at the 140th Open Championship, where he held off Dustin Johnson and Phil Mickelson to clinch a thrilling victory at Royal St George's in July 2011. The Open victory came five years after he inspired Europe to an emotionally charged 2006 Ryder Cup win over the United States at the K Club, having been picked as a wild card. His next involvement in The Ryder Cup came in 2010 when he was one of Captain Montgomerie's Vice Captains in the narrow win at Celtic Manor. he was also a Vice Captain for Jose Maria Olazabal in the thrilling 2012 victory at Medinah. Captain of the European Team for the 2016 Ryder Cup matches in the USA. The great job Captain Clarke did, unfortunately, couldn't lead his team to victory in the contest narrowly won by the US team. 22 global wins spanning across six tours worldwide. Now competes on the PGA Tour Champions and European Tours. An enthusiast of golf course design having been involved in many projects around the world including Pinnacle Point in South Africa and Moy Valley in Ireland to name just two.