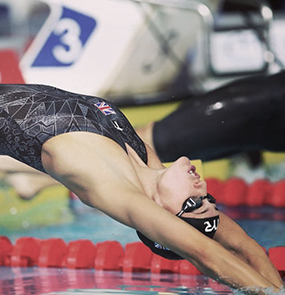 "One of my favourite things about swimming is travelling the world and meeting new people."

Georgia Davies has competed at every level of swimming including two Olympic Games and three FINA World Championships. Georgia made her senior breakthrough as part of the Wales team at the 2010 Commonwealth Games where she landed 50m Backstroke bronze. Since then she has been a regular member of both Wales and GB teams. 2018 was a stellar season for Georgia. She returned from the Commonwealth Games on Australia's Golf Coast as a double bronze medallist and the Glasgow European Championships with a quartet of medals; two Golds, a Silver and a Bronze. She is current British, European and Commonwealth Record holder in the 50m backstroke. Following the most successful major championship of her career, Georgia is aiming for her third Olympic Games.