Gony is a former junior surfing prodigy and the only Spanish surfer to have won a World Junior Title. Having relocated to Portugal, Gony is in hot pursuit of the World Tour and the leading 32 surfers in the world. 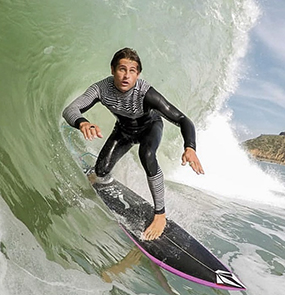 "To wake up every day and do something I love is what most people can only dream of. To have my passion double up as my job is a blessing in itself and I don’t take it for granted. I will always be professional and do my sponsors proud because this life isn’t one to miss."

At the age of 1, Gony's parents decided to move to Galicia, Spain. Here, he was raised, with a football practically glued to his foot. He later realised that the next coolest thing at that time was Skateboarding. Soon after this discovery, his father taught him to surf, and as cliché as it sounds, he was hooked from the first wave. From that day onwards, being a Pro Surfer was his dream. He began competing in the local competitions at the age of 11, progressing to the national series where he found a true love for competing. To this day, this feeling is still as strong as ever. In 2002, when he was 17, the Spanish federation selected Gony to represent the country in the ISA World Grommet Championships in Australia. Here, he ended up winning the under 18 division and became the only Spanish surfer to have won a World Junior Title. From that point onwards, he knew that his dream of turning into a Pro Surfer was a realistic goal. He finished high school while travelling around the world already creating a name for himself, whilst knowing the real hard work was just about to start. With an extremely supportive family and the drive and determination to make the dream reality, he knew it was possible. Aged 18, he began competing in some World Qualifying Series competitions, as well as doing the full European Junior Tour, making numerous finals and winning events along the way until the age of 21. As his Junior Career came to an end, he has been surfing on the WQS Tour with his fair share of wins; he won the WQS 5 stars (World Qualifying Series ) in Zarautz and made it to the Final in the WQS 5 stars Pantín Classic in Ferrol. Off the back of these successes, Gony is now in pursuit of the World Ranking.