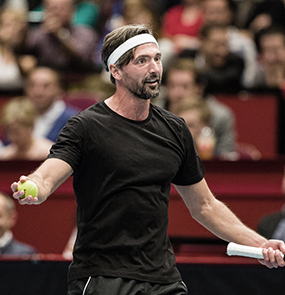 He is one of the greatest sportsmen ever to emerge out of Croatia: a man who performed brilliantly on the world’s tennis courts over a long career, consistently battling among the Grand Slam contenders. Goran Ivanisevic endured a number ‘near misses’ before finally securing his first major success with the Wimbledon title in 2001. As a child, he played many sports but his potential as a great tennis player was obvious, and he enjoyed a sparkling junior career around the globe. By 1988, aged 17, he was ranked as No.3 in the world at junior level although his first major success came in the doubles arena, where he took out a title in Frankfurt, alongside the German Rudiger Haas. He made history winning the 2001 Wimbledon title, having been granted a wildcard. No player before or since has ever won Wimbledon as a wild card, and it’s unlikely ever to happen again.