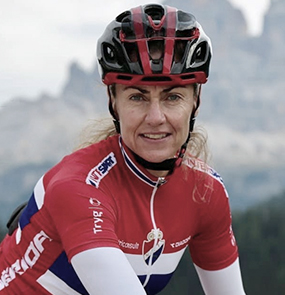 "I love my sport, I love riding my bike and I still love putting up new goals for a new season to come."

A Norwegian professional cross-country cyclist, nicknamed amongst others as ”The Iron Woman" and the "Mountain bike Queen" in the sport. She has won the overall World Cup 4 consecutive years (2003-06) and has a total of 29 World Cup wins, now passed Juliana Furtado’s record set in the 90s. Gunn-Rita won her last WC race in Lenzerheide in 2015. Some of her greatest achievements are the Olympic gold medal in 2004 Athen, 10 World Championship gold medals, 8 European Championship gold medals, and many silver medals. The last rainbow jersey she won in 2015, Worlds Marathon in Val Gardena (ITA). She has been riding a bike since she started riding to school six years old. She started first back in 1995, 22 years old. She describes the first years with MTB as being like riding a rollercoaster, ups and downs, great feeling and not that great, excitement, little fear and trill.