British middle-distance running athlete who specialises in the 800m, 1500m and mile run. Hannah won silver at the World Championships and competed at the 2012 Olympic Games in London. She is one of only three British women in history to have run the 800m in under two minutes. 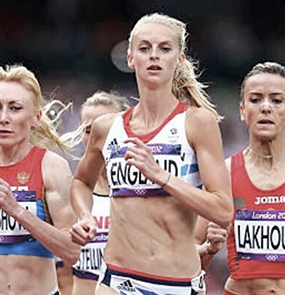 Hannah England is a British middle-distance runner who specialises in the 800m, 1,500m and mile run. Hannah won a World Championship silver medal at the 2011 World Championships in Daegu. She is one of three British women in History to have run the 800m in under two minutes and 3,000m in under nine minutes. Hannah attended the Olympic Games in Beijing 2008 as a travelling reserve aged 21, which was an incredible achievement that made her more driven to succeed. In the following year, Hannah seized the opportunity at the IAAF World Cup where she achieved a silver medal. This consistency continued, as she finished second in the 2010 European Championships. Hannah was becoming a force to be reckoned with and stamped her authority by smashing the national AAA title the same year. However, 2011 was to become Hannah’s breakthrough. Aged 24, she made the final of the 1500m World Championships in Daegu. The podium seemed out of Hannah’s reach as she was at the back of the leading pack in 7th place. With the final straight looming Hannah kept her composure and burst past her competitors to claim silver. In 2014 she was given the honour of leading Team GB at the European Team Championships in Germany, further cementing her mature talent and leadership.