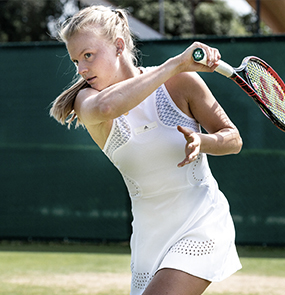 "It doesn't always go to plan, you just have to keep striving."

Harriet Dart is a British tennis player from Hampstead, London. At 22 she is one of the UK’s most promising young tennis players. Harriet spends the majority of her time on the road and under the guidance of her coach, Goran Marijan, she is on the path to a Top 100 WTA ranking. Harriet has a career-high WTA singles ranking of World No.167 achieved in July 2018. She also has a career-high WTA doubles ranking of No. 124 achieved in August 2018 after a run to the semi-finals in the mixed doubles with Jay Clarke at Wimbledon. She made her WTA debut at the 2015 Aegon International and has to date 14 titles on the ITF women’s circuit. Away from her busy competition and training schedule, Harriet is a self-confessed ‘foodie’ and enjoys spending time with her sister and family.