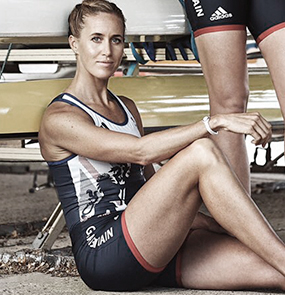 "If you work hard and try your best absolutely anyone can do anything."

Double Olympic champion, three-times world champion, twice European champion and a multiple world cup gold-medal winner - Helen Glover is one of the most decorated athletes in the GB Rowing Team. She was one of the most prominent sporting stars to emerge from the 2012 Olympic Games, typifying the ideal that hard work breeds success. Alongside her rowing partner, Heather Stanning, Helen wrote herself into the British history books by not only winning Team GB’s first Gold of the Games but claiming British Rowing’s first ever female Gold medal. Born in Truro, Helen showed sporting promise from an early age competing internationally as a junior in cross country and training in the England Hockey Satellite Squad. It wasn’t until after the 2008 Olympics in Beijing that Helen first stepped into a rowing boat.