Iconic backcountry skier, The North Face Athlete and five-time winner of the Female Skier of the year Powder Award.

First ski descent of the Reddomaine Peak, China. Voted Female Skier of the Year five times in the Powder Awards. 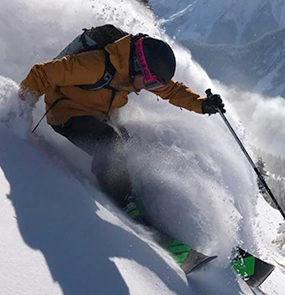 "I love adventures of any kind, but mainly the ones where you leave out of the back door with just some skis and a daypack. In other words, I like things that are simple and straightforward with a challenge."

During her twelve years of skiing professionally, there are very few places on the planet that Ingrid hasn’t explored and skied. Famous for her freeskiing in first ski descents in Greenland, Baffin Island & 20,000 feet Reddomaine Peak in China, the ten-time Powder Awards Female Reader Poll Winner has been calling the mountains home for a long time. Backstrom was named a top 50 most influential action sports athlete by ESPN in 2013, as well as Female Skier of the Year five times in the Powder Awards. She is part of the elite roster of North Face Athletes and in 2005 was awarded the Powder Awards Breakthrough Performer. If there’s one thing Ingrid knows about, it’s powder. She can guide you to the secret, untouched powder fields of Alaska, Chile, and Antarctica, to name a few. Freeskiing just got redefined.

British Columbia, Canada's westernmost province, is defined by its Pacific coastline and mountain ranges and offers endless opportunities for adventure.


Heliskiing with Ingrid Backstrom on the Island of Kulusuk, Eastern Greenland

Heliskiing or Backcountry Skiing on the Island of Kulusuk, Eastern Greenland. With thousands of peaks and slopes to explore and ski, in a landscape, nature and culture like no other, where untouched snow-capped peaks tower over the frozen landscapes of towering icebergs, fjords and islands. Greenland is, and will keep on being one the world’s most special places to go Heliskiing.


Heliskiing with Ingrid Backstrom in the Chugach Mountain Range, Alaska

In the heart of the Western Chugach Mountains, the magic of deep powder, inspiring steeps and colossal vertical feet beckon. From the black sand shores of the Pacific Coast to the jagged peaks of the Talkeetna Mountains, Heliskiing in this region will take your breath away.

Heliskiing in Skíðadalur Valley on the Troll Peninsula in Northern Iceland. Exclusive access to longest runs and the best summit-to-sea skiing in Iceland. The peaks here, cut up by deep, glacier-carved valleys and fjords, are of modest height (few surpass 1,500m above sea level) but the vertical descents can be up to 1,000m, some all the way to the black volcanic shoreline.


Skiing with Ingrid Backstrom in Antarctica

Arrive in Ushuaia, Argentina, aboard the Sea Adventurer and set sail down the Beagle Channel. Cross the Drake Passage, looking out for the Humpback Whales, along with skies of seabirds. Enjoy ski and trekking objectives in Neko Harbour, Anvers and Wenke Islands, Paradise Bay and the new ski descents of Charlotte Bay. Accompanied by visits to penguin rookeries and killer whale and leopard seal sightings.