Won Best English Young Player Award, Youngest person ever to have played on the Queens Ground at Guards Polo Club. 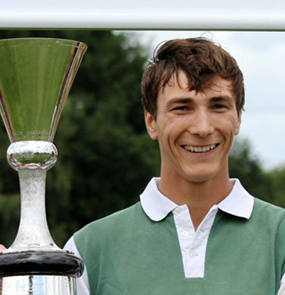 "Polo is my life and my aim is to put England at the top of the International scene. I love helping people get involved in polo as its the best sport in the World, but people don’t realise that until they try it out."

Jack Richardson is a 27 year old professional polo player. He is ranked in the top 3 players in the UK and is based in West Sussex, England. Whilst attending Harrow School, where he was an all-round sports scholar, he won the top section of HPA young Polo, Gannon, four times until he turned professional at the age of 17. Since then Jack has become one of England’s most prominent polo players. In the 2014 season Jack was awarded the John Ferguson Trophy by Prince Charles for the Best English Young Player. In the recent 2018 season he has represented Cowdray Vikings in the high goal and is a main member of the England squad. He has won multiple High and Medium goal tournaments including The Indian Empire, Challenge Cup, The Royal Windsor, The Dollar Cup and many more. Having started playing polo aged 6 in the Pony Club, he is now the youngest 7 goaler in the UK. Jack played his first adult tournament at the age of 10 and is the youngest person ever to have played on the Queens Ground at Guards Polo Club. Jack has also played in the Queen’s and Gold Cups for UAE Polo Team owned by HH.Sheikha Maitha Al Maktoum. Jack’s polo experience, however, does not just span the UK; he has played in many countries including China, Argentina, USA, Australia, New Zealand, South Africa, Dubai, Nigeria and Spain alongside and against some of the world’s best players. He has won many tournaments around the world and in the UK and represented England in test matches in New Zealand, USA and China. Jack prides himself on having very good ponies and runs a stable of 34. He retrains ex racehorses to become polo ponies, he has won many pony prizes including; Best Ex Racehorse Producer 2016 and his mare Harmony won Best High Goal pony 2017. Jack looks top push polo into new frontiers and is always keen to help brands and events become a success in the polo world.