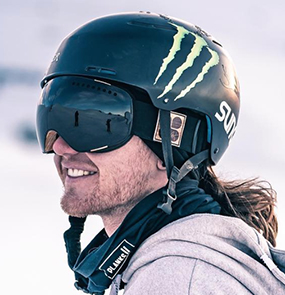 "I'm travelling the world year-round and I'm loving it."

Hailing from the dry slopes in Sheffield, James Woods' remarkable rise to the top has been unconventional. However, despite the natural adversity of the British climate, Woods has firmly established himself as one of the top freestyle skiers in the world. Having won the Crystal Globe in the 2012/13 season, the most prestigious prize in the sport that recognises consistency over the course of the season, Woods became world No.1 and was favourite to add Olympic Gold to his already impressive resume in Sochi, 2014. However, a serious hip injury just days before the Olympics seriously hampered his chances. Despite this, he was committed to perform and even though visibly impeded, he still placed an impressive 5th. In addition to reaching world No.1, his world ranking has never left the top 5 in the last 5-years (currently 2nd) and is a multiple World Cup winner and X Games medallist. In 2018, Woods began the year strong with a gold at the World Cup event in Cardrona, New Zealand. He was then selected to compete at the Pyeongchang 2018 Winter Olympic Games in slopestyle skiing. While in Korea, Woods breezed through prelims into the final. Giving a beautiful performance in the final, he came 4th, just missing out on an Olympic medal.