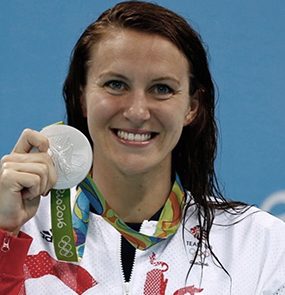 "You've got to have that competitiveness inside along with the drive and determination to win. I just want to be the best that I can be so that I have no regrets when I'm older. I can say that I gave it the best shot that I could."

Jazmin ‘Jazz’ Carlin is the British swimming sensation who recently became a double Olympic Silver medallist at the Rio 2016 games. Prior to this Jazz won double Gold at the European Short Course Championships (2015) in the 400m and 800m freestyle. Jazz's 2015 success also involved Bronze at the World Championships in Kazan (2015), three Silver and one Gold medal in the World Cup and three Gold Medals at the 2015 British Championships. Prior to 2015 Jazz has also won Silver at the World Championships in Doha (2014), two Gold medals at the European Championships in Berlin, a Gold medal at the Glasgow Commonwealth Games. Born and raised in Swindon into a large sporting family Jazz moved to train in Swansea’s national pool. Whilst in Swansea she became a qualified personal trainer and completed a degree in Business & Accountancy at Swansea University, whilst also coaching at local clubs and schools in her spare time. Jazz has now moved back home to train in Swindon where she is producing some fantastic results. Jazz was first recognized when she won Bronze at the 2005 European Junior Championships. A period of development occurred before 2009 saw her win her first senior medal at the World Championships and she has subsequently gone onto to win medals at both the European Championships and Commonwealth Games as well as being a seven time welsh record holder. After helping the Great Britain team to a 4x200m Freestyle Relay medal at the 2010 European Championships in Budapest, Carlin ended a barren spell of 36 years for Welsh female swimming medalists at the Commonwealth Games by striking 200m Freestyle silver in a Welsh record time. A few days later, Carlin added to her tally in India, becoming the first female Welsh swimmer in 80 years to win two Commonwealth medals at one Games by scooping bronze in the 400m Freestyle. Later that year in 2010 Jazz was announced as one of the six nominees of the BBC Cymru Wales Sports Personality of the Year 2010. Despite this progress, 2011 and 2012 were unfortunate years for Jazz as a series of injuries then illness ruined her chances of competing at London 2012. However with those two years behind her, Jazz bounced back making her mark on the global stage where she finished a credible fourth in the 400m freestyle at the World Championships, missing out on a bronze by just seven one thousandths of a second. 2014 was a fantastic year for Jazz, kicking off her year with Gold at the Mediterranean Open in the 400 meters, which put her in third position in the World Rankings. Jazz followed this up at the British Championships winning the 800m, breaking her own Welsh record in the process. Jazz entered the Commonwealth Games in Glasgow in stunning form and in-front of Princes’ of Wales William and Harry, won Wales’ first Gold in the pool for 40 years, winning the 800m in 8 minutes 18.11 seconds. The next day Jazz added to her medal haul, winning Silver in the 400m. Fresh from success in Glasgow, Jazz headed to Berlin to compete in the European Championships, becoming one of the stars of the meet, winning double Gold in the 400m and 800m freestyle. This was closely followed by an impressive swim at the World Championships in Doha where she achieved Silver narrowly missing out on Gold. These performances capped off an unbelievable year for Jazz. Jazz began her 2015 year with a bang achieving 3 Gold Medals at the British Championships in 800m, 400m and 200m. She has since won Bronze at the World Championships in Kazan in the 800m freestyle, three Silvers and one Gold in the World Cup series and double Gold in the 800m and 400m freestyle at the European Short Course Championships in Israel. Jazz continued this success into 2016 where Rio qualification was the main focus. Jazz qualified for the Olympics in superb style, winning the British Championships over 200m, 400m and 800m. Following this success Jazz walked away with 2 Silvers in the 400m and 800m at the European Championships in London on the back of a heavy training period. Less than 3 months until the Games begin Jazz competed at the Mare Nostrum events in Barcelona and Canet where she picked up 4 Golds in the 400m and 800m. Jazz's Olympic journey was nothing short of brilliant when she came away with two Silver medals in both the 400m and 800m freestyle!