World-class explorer, famous for summiting and exploring the highest peaks in the world.

First American ski descent of Everest, south pillar route from the summit. Part of the first ascent of the Shark's Fin on Meru. Audience Choice Award at 2015 Sundance Film Festival for his film, Meru. Meru, also shortlisted for the 2016 Oscar shortlist for Best Documentary. 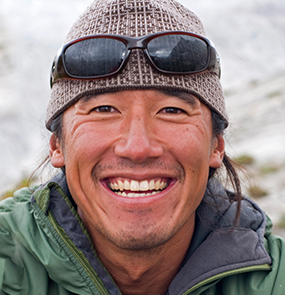 "It's about sharing stories that inspire people and open their eyes to a different world."

As a 15-year veteran of The North Face Athlete Team, Jimmy is one of the most sought-after and recognized adventure sports athletes, photographers and filmmakers working today. He is one of the only people to ski Mount Everest from the summit and climbed the much coveted first ascent of the Shark's Fin on Meru. Jimmy has been profiled in numerous publications including National Geographic, The New York Times, Wall Street Journal, GQ, People and The New Yorker. As a filmmaker, Jimmy has directed documentaries, TV and commercial projects. His film, Meru, won the Audience Choice Award at the 2015 Sundance Film Festival and made the 2016 Oscar shortlist for Best Documentary.

Jackson Hole Mountain Resort valley sits between the Teton Mountain Range and the Gros Ventre Range in Wyoming, near the boarder of Idaho. With many adventures making this their home, none more so than Jimmy Chin. Having lived here for many years Jimmy can take you on the backcountry routes that only a local would know.