Curently ranked British No.2, Jonathan, is one of Team GB's most promising Sabre fencers, with his sights firmly set on Tokyo 2020. 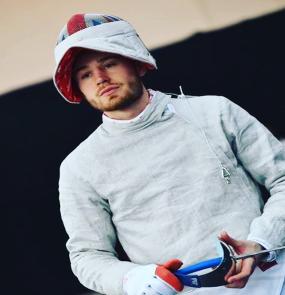 JJ was introduced to fencing during a school assembly aged eleven. He was hooked instantly and couldn’t wait to try it for real at his next PE lesson. He went home “raving” about it but his parents were not convinced, fearful of the cost. When JJ returned home from school the next day with a letter saying that he could be “quite good” they couldn’t refuse. JJ began fencing at the relatively late age of 11 years old but quickly worked his way to the top of the rankings. In April 2016 at the age of 20 he took gold at the Senior British Nationals and became the 2016 Senior National Sabre Champion. He also medalled at the London International Satellite event where he took Bronze. In the 2014-2015 season he underwent selection alongside the top nine senior fencers and was successful in being one of only six Sabre fencers to be placed on British Fencing World Class Program to prepare for the 2020 Olympics. JJ is now currently ranked in the top 4 of the senior rankings. With the support of his family, JJ is now part of the men’s sabre squad training in London with Tokyo 2020 firmly in his sights.