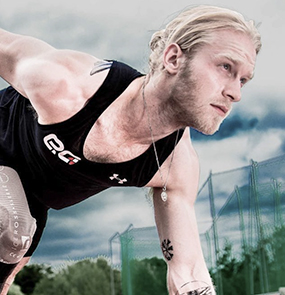 Jonnie is the double Paralympic, World & European T44 100m Champion. He sensationally won his first Paralympic title at the London 2012 Games during one of the best summers in British Athletics history. He then successfully defended his title at the Rio 2016 Paralympics. In Rio in 2016, Jonnie re-set the record books, running a time of 10.81 seconds in the T44 100m final, setting a Paralympic record in the process. Jonnie competed in his first international race at the Paralympic World Cup in Manchester. A month later he broke the World Record, and in September 2012 he won gold, making it a year to remember. In 2013, Jonnie was awarded an MBE for services to athletics. After battling through injury in 2015, Jonnie returned to success in the all-important 2016. Jonnie began his season by winning the T44 100m final at the IPC Athletics European Championships in Grosseto and just a month prior to the Paralympic games, Jonnie recorded a lifetime best (10.68) and a British Record at the Loughborough EAP meeting. On the 9th September 2016, Jonnie became a double Paralympic Champion, defending his title and setting a new Paralympic Record (10.81) in the process. Jonnie continued his unbelievable success into 2017 by winning gold in the World-Para Athletics Championships.