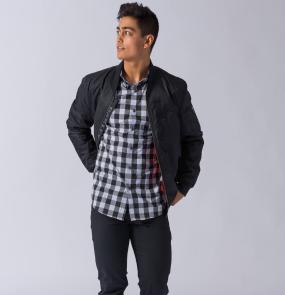 50% Japanese, 50% British, 100% Australian. Born in the Gold Coast, Australia my passion for riding bicycles was evident from a young age. I loved riding his 12-inch bicycle at Ashmore BMX Track after pre-school, and my parents bought me my first BMX race bike when I was 3 years old. BMX found me. Saya, in contrast, was pushed into the sport as she traveled to the BMX tracks to find herself playing in the trackside mud. She entered her first race when she was 4 years old, crashed, and hated it, but started to fall in love with the sport when she tried it again a year later. We have both been racing together since. ​ We moved to Japan as a family in 2001 and established a name for ourselves within the domestic circuit. This is where we started to use the last name "Sakakibara", which is our Mum's last name. During our 6 years in Japan, we lived as normal Japanese kids, attending school, playing sports, and making friends, all while learning Japanese culture including speaking, reading and writing. Japanese value of respect is deeply ingrained within our roots. Moving back to Australia in 2007, we immersed ourselves in the Australian BMX scene and loved it. We always recall the initial days where no-one including the announcers could pronounce "Sakakibara". We have really come a long way to where we are now, as the highest ranked Australian male and female riders and a well-known name within the BMX industry. Ever since we saw BMX for the first time in the Olympics in 2008, Saya and I knew that this was the newly established pinnacle of the sport that we wanted to reach. Our goal is to medal at the 2020 Tokyo Olympics, together as brother and sister.