Spanish freestyle skier who competed in ski halfpipe and made her Olympic debut of the ski halfpipe in Sochi 2014.

4th in North American Freeride Championship in 2004,
5th in World Cups in La Plagne and Kreischberg in 2009 and 2010, brand ambassador for Nordica, Colmar, and Bolle. 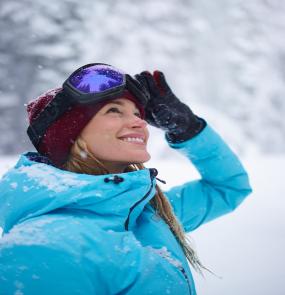 "The mountains have always brought me a lot of peace. Nothing brings my life into sharper focus than a day spent on the mountain in good conditions with good friends."

British-born Katia grew up in Spain. When she was five, she started skiing in Andorra, and so began a lifelong love affair that has seen Katia travel the world in search of powder and progress from ranked freerider to Olympic halfpipe skier and Nordica Ambassador. After years competing in racing and moguls as a child, Katia decided to take the leap into freeride skiing at the age of 18. With early success at the 2004 North American Freeride Championships, Katia placed 4th, that was enough to pursue her dreams further to compete at the highest level. She also began competing in slopestyle and halfpipe disciplines winning her first contest in Verbier in 2005 and placing 5th in World cups in La Plagne and Kreischberg in 2009 and 2010. Further success followed until two severe injuries put her out of competition for 2 years, Katia never lost sight of her Olympic goal and returned to competition in time to qualify for the 2014 Olympic games. She has since retired from competition and now travels the world in search of powder, as a brand ambassador for Nordica, Colmar, and Bolle. During the off-season, Katia is a qualified personal trainer and currently pursuing a Masters in Sports Management.