British track and road cyclist who has triumphed in a variety of disciplines, most recently claiming Gold in the inaugural Madison event at the Tokyo 2020 Olympic Games. Kenny is the most decorated female Olympic track cyclist and the most successful female British Olympian in history. 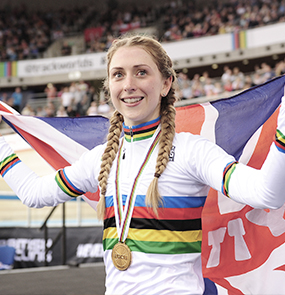 "Cycling has never felt like a job. To get paid for something that you absolutely love is amazing. I just do it because I love it. "

Laura Kenny is a professional track and road cyclist who specialises in the omnium, team pursuit and scratch race disciplines. Laura races for British Cycling and the professional cycling team, Matrix Pro Cycling. With 4 Olympic gold medals, having won both the team pursuit and the omnium at both the 2012 and 2016 games, Kenny is both the most successful female track cyclist in Olympic history (behind only Dutch track and road legend Leontien van Moorsel among all female cyclists), and Great Britain’s most successful Olympic female competitor in any sport. Laura Kenny (nee Trott) married fellow Olympic track cyclist Jason Kenny in September 2016 and the couple welcomed their first child in 2017.  Laura and Jason spend most of their time near Manchester, in order to allow them to train at the HSBC UK British Cycling Academy.


Cycling with Laura Kenny in the National Cycling Centre, Manchester

British Cycling are famously private regarding the training that the Team GB Cycling team undertake in the National Cycling Centre. However Jason & Laura can provide access and a bespoke training experience into their world of cycling at the very highest level. Part of the National Cycling Centre, the Manchester Velodrome is an indoor Olympic-standard cycle-racing track and is one of the World’s finest and fastest indoor tracks. One lap is 250 metres and the bankings are 42.5 degrees.