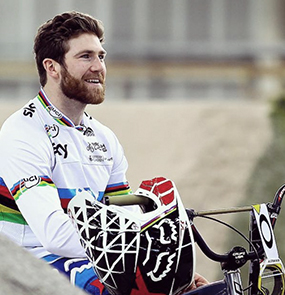 "When I was a kid I would never have believed one day I would be riding my BMX bike in the Olympics, so I'm just grateful I will be riding in front of huge audiences."

Liam began cycling in 1994 when he was just five years old and in 1999 he had already won his first European BMX Championship title. In 2008, aged 19, Liam made it to the quarterfinal stage at the Beijing Olympic Games where BMX made its debut. In 2011, Liam was showing the power output potential to push for a position as man one in the Track Sprint team but decided that the BMX track was where he could do most damage. In 2012, Liam won Silver at the BMX World Championships, but sadly in the SX (Supercross) World Cup format Liam broke his collarbone ten weeks out from the London 2012 Olympic Games. Liam showed incredible strength and courage to recover and line himself up in the final of the Games but sadly lost his footing and crashed out of the race. Liam showed great maturity and resolve to bounce back from the setback of missing a medal at his home Olympics. In 2013 at the BMX World Championships in Auckland (NZ), Liam won all of his races on the way to taking the rainbow jersey and crowning off an incredible comeback year as World Champion. In 2014, Liam became the first British male to win the UCI SX World Cup series.