Gold medal in the team pursuit at the 2009 UCI Track Cycling World Championships, two wins in the season-long UCI Women’s Road World Cup and she entered the new Olympic year of 2016 as reigning World, Commonwealth and National road champion. 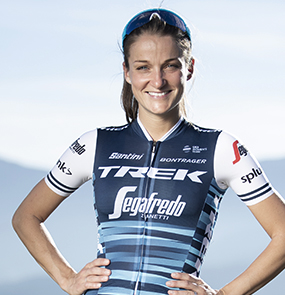 "Personally I find it hard to replicate the feeling of freedom that cycling gives me. I rely on it and exercise generally to relieve any anxiety or stress that I may have built up. Cycling has given me so much – a career, way of life and chance to travel the world and even a husband!"

Lizzie Deignan has established herself as the dominant rider on the international women’s road racing scene, having won the 2014 and 2015 UCI Women’s World Cup series and achieving lifelong dreams by winning the 2015 road race World Championship in Richmond, USA and the Tour of Flanders in 2016. ​ The Yorkshire rider also had the honour of being the first British athlete to win a medal - silver - at the London Olympics in 2012 and quickly became one of the country’s most famous sportspeople. ​ Having quickly graduated through the British Cycling system after being talent spotted at school at the age of 16, Lizzie started out on the track and soon had noticeable success winning a trio of golds – the points race, scratch race and the team pursuit – at the Track World Cup in Manchester in 2008. She followed this up with gold in the women’s team pursuit at the World Championships in 2009 and several gold medals at World Cups on the track that year. ​Although Lizzie played a key role in Nicole Cooke’s winning road race team in the 2008 World Championships in Varese, Italy it was 2010 that she began to shine on the road, amassing a strong set of results with the Cervelo Test Team including a stage of the Tour de l’Aude and three stages of the Tour de l’Ardeche. ​ In 2011, Lizzie won the British national road race title for the first of three times and having realised that her heart was in road racing took the decision to ride on the road, not the track, at London 2012. A decision she hasn’t looked back from having won a string of titles including the Commonwealth Games road race in 2014 and many podiums with her team since 2013 – Boels Dolmans. The team is the dominant force in women’s cycling – cemented by Lizzie and the team winning the 2016 team time trial at the World Championships in Doha and holding the individual rainbow jersey in the team in 2015 and 2016 - and then in 2017 after Chantal Blaak won in Bergen, Norway. ​ After struggling with illness at the start of 2017, Lizzie soon found her stride supporting teammate Anna van der Breggen to the triple crown of Ardennes classics whilst taking 2nd in each race herself. Lizzie soon followed this up with a gritty and determined win in front of a home crowd at the Tour de Yorkshire before reclaiming the National Champions jersey on the Isle of Man. An impressive ride also saw Lizzie take second in La Course by Tour de France on the Col D'Izoard. But the preparations for the World Championships in Bergen, Norway in September took an unexpected twist after an emergency appendix operation earlier in the month which meant she was lucky to be at the start line. ​Lizzie and husband Philip had their first child, Orla, in September 2018. Lizzie has announced her intention to take a year out and return to cycling for the 2019 season when she will join the newly formed Trek Segafredo women's road team.