American freestyle skier who has cemented her place as one of the best big-mountain skiers in the world. 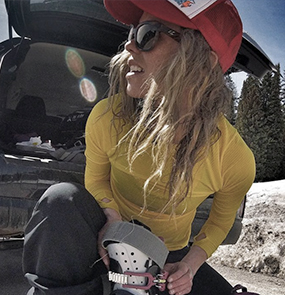 "Anything is possible, especially when you remember to play outside."

As a professional skier, Lynsey’s career has spanned over a decade. Starring in films from the likes of Teton Gravity Research, Warren Miller, Sherpa’s Cinema and more. Lynsey has skied on 6 continents, won every big mountain competition she’s entered, been awarded Female Skier of the Year by Powder Magazine multiple times, and cemented her place as one of the best big mountain skiers in the world while inspiring a generation of young female athletes through popular Ted talks on 'Skiing like a girl' and filmmaking. As a director, Lynsey produced and directed the first and only all-female ski film Pretty Faces after fundraising $113K on Kickstarter. Pretty Faces was the most successful fundraising campaign for an action sports film ever on the platform and went on to sell out 100 shows and win various awards. She loves to share stories that help us all remember that anything is possible especially when you remember to play outside.