A German Portuguese surfer and one of the best European surfers. Marlon was European champion in 2012 and continues to compete around the world. 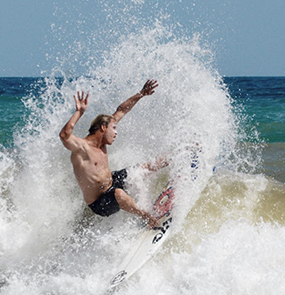 Marlon is a professional surfer from Portugal/ Germany who lives in planes hotels and spends most time in the water. Marlon is passionate about Algarvian surf where he has a home in Lagos. He has surfed all over the world as a professional surfer on both the WQS and the elite WCT, but he still is stoked to return home and surf his local favourites.  Starting with his European junior title and 3rd in the world junior finals, he went on to compete successfully on the WQS tour and found himself fulfilling his dream in 2009 and becoming one of the elite on the WCT tour. He was European champion in 2012, and continues to compete around the world today.

Ecuador’s surfing is focused around northern reaches of the country and the expertise between Gony and Marlon will take you off the beaten track, away from the crowds of Montanita, to remote surfing that utilises the north and south swells whilst embracing authentic south American culture.