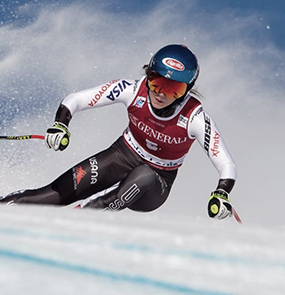 "I love skiing the bumps, just the rhythm, trying not to eat it on a bump is really fun for me."

2x Olympic gold medalist Mikaela Shiffrin began turning heads almost instantly when she finished top 15 in her first two Nor-Am Cup races. The heads started spinning when she won a super combined in British Colombia two weeks later, and then ski fans and coaches went cross-eyed when she landed a World Cup podium during her rookie season - at age of 16. She then proceeded to blow the world apart with a World Championship slalom gold medal and the World Cup slalom title during her sophomore year. She topped herself again in 2014, earning five more World Cup wins, giant slalom podiums, an Olympic gold medal, and a second-straight slalom title. Shiffrin's meteoric rise into the World Cup elite wasn't a surprise to anyone who's been paying attention. With the work ethic and passion of a veteran, Shiffrin posted her first World Cup starts as a 15-year-old and nearly scored her first points.