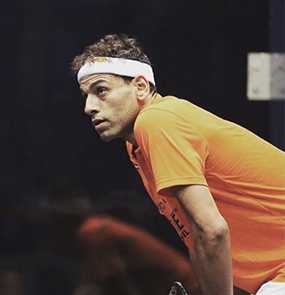 "During my career, I get to have some good days and some bad days, but in order to deserve the good days, I have to accept the bad days first. I don't try to compete with anyone other than myself, each day I try to be better than the player I was yesterday and if I can achieve that on a daily basis then I know I am on the right direction."

One of the most talented players on the PSA World Tour, Mohamed ElShorbagy has flown up the world rankings since joining the PSA in 2006 as a 15-year old schoolboy, under the tutelage of the legendary Jonah Barrington. The Alexandria-born star rose to prominence in 2007 after he became the first player in history to secure a maiden PSA World Tour title at a five-star event. He then entered the record books again soon after, becoming only the second man after Ramy Ashour to win the World Junior Championship twice when he triumphed in 2008 and 2009. The Egyptian came close to winning the senior World Championship in 2012 after besting James Willstrop in a five-game semi-final thriller but lost out to compatriot Ashour in the final. In 2013 he claimed his first World Series win in the Qatar Classic and exhibited some supreme form throughout the 2014 campaign, winning five events including World Series tournaments at the Hong Kong and the US Opens. The latter in particular was significant because it elevated ElShorbagy to World No.1 for the first time in his career, courtesy of his victory over Gregory Gaultier in the semi-final, becoming the fourth youngest player to reach the milestone. He lost a second World Championship final, against compatriot Ashour, during the 2014 tournament in Qatar in what was dubbed one of the greatest squash matches ever. The Egyptian recovered from his World Championship heartbreak to lift the Tournament of Champions title in January 2015 and, after finishing runner-up at both the Windy City Open and the El Gouna International, he won the British Open for the first time in his career, beating Gaultier in the final. ElShorbagy lifted the British Grand Prix title in September 2015 before celebrating 12 months at the summit of the World Rankings the following month. After claiming another PSA World Series triumph at the Qatar Classic in November, he dropped out of the World Championship at the third round stage after a shock exit to James Willstrop as his search for the sport’s biggest prize continued. However, a spell-binding run of form from December 2015 to April 2016 saw ElShorbagy dominate the PSA World Tour, bringing him up to six successive World Series title wins, including defending his crown at the British Open after ending a four-match winless run against Ashour. During that period, ElShorbagy also broke Ashour’s record for the highest ever World Rankings points average in April, a record he then shattered again a month later. A superb season was rounded off in style when he was crowned the 2016 PSA Men’s Player of the Year. ElShorbagy started the 2016/17 season fairly strongly with another victory at the U.S. Open, but he missed out on becoming the first player to win the Qatar Classic on three successive occasions after a final defeat to compatriot Karim Abdel Gawad - just a month after Gawad had beaten him in the World Championship semi-final. However, the following month saw ElShorbagy become only the third Egyptian player to spend a whole year at the summit of the World Rankings after he topped the December 2016 World Rankings. ElShorbagy suffered a slump in form during the 2016/17 season with the former World No.1 suffering from his longest title drought in three years. The Egyptian lost in the semi-final of the British Open to England’s Nick Matthew and then exited at the quarter-final stage of the El Gouna International Squash Open after defeating his younger brother, Marwan. However, ElShorbagy’s fortunes changed at the season-ending PSA Dubai World Series Finals as he downed England’s James Willstrop 3-0 in the final to finish the season on a high with a title.