English professional golfer renowned for his single-minded dedication to the game. He was ranked No. 1 on the Official World Golf Ranking for a total of 97 weeks. 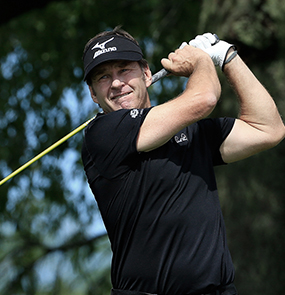 "“I was just absolutely mesmerised when I saw the Masters that year, particularly by Jack Nicklaus striding across Augusta’s impossibly green fairways. I marched downstairs and announced to my Mum that I was going to take up golf. ‘You’re having a haircut first’, she said, which seemed like a fair enough deal at the time – even if Augusta was waiting!”"

It is incredible to think that, as a 14-year-old watching the 1971 Masters on his parents’ new colour television, Nick Faldo had never even picked up a golf club. Within three years he was a successful British amateur and by the age of 20, he had become the youngest player ever to qualify for the Ryder Cup. Thirty years later, and with six Major championships, more than 40 tournament victories and a total of 98 weeks as the world’s number one golfer, Nick is broadly regarded as the most successful golfer that Britain has ever produced. For his contributions and service to golf, Nick Faldo received a knighthood from Queen Elizabeth II in November 2009. Sir Nick is the only living British golfer to receive such an honour.