2x national champion, finishing twice in the top ten of the Vuelta a España, winning stages in 2013 and 2015. He represented Ireland at the 2008 Summer Olympics in the road race. He has competed for Ireland 7 times at the road world championships. 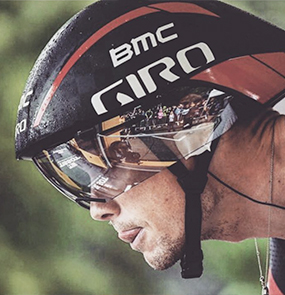 Nicolas Roche is an Irish professional cyclist with UCI World Tour team "BMC Racing". He is the former Irish National Road Race and TT Champion and is the son of Stephen Roche, a former World Champion and winner of the Tour de France and Giro d’Italia.  In 2014, Nicolas changed his race programme to accomodate the Giro d'Italia, which began in Ireland for the first time. The opportunity to ride a Grand Tour in front of home fans was a very special experience for Nicolas and the Irish turned out in their thousands to support him. It was announced that he would be joining Team Sky in 2015 and Nicolas enjoyed a very successful first season with the team, he was an integral part of the team that aided Chris Froome to victory at the Tour de France.