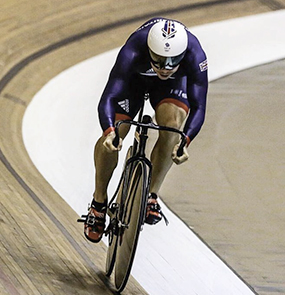 Philip Hindes is a 2x Olympic Sprint Cycling Champion from Manchester, UK. In July 2012, Hindes was selected to compete for Great Britain at the 2012 Summer Olympics in the men's team sprint as part of a squad that also included 4x Olympic gold medalist Hoy, and 2x Olympic gold medallist Kenny. The British trio won the gold medal and set new world records in both the first round and again in the final against France. Hindes was appointed Member of the Order of the British Empire (MBE) in the 2013 New Year Honours for services to cycling. At the 2018 Commonwealth Games, Hindes won silver in the team sprint event alongside Joseph Truman and Ryan Owens.