Professional squash player from Egypt, widely regarded as one of the greatest players in history. He was the youngest player to reach No.1 and is 3x World Champion. 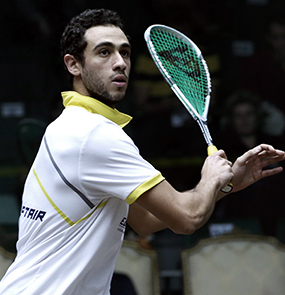 Ramy Ashour is one of the most technically gifted players ever to play the game of squash and a real fan favourite. He won his first major professional title in 2007, defeating David Palmer in the Canadian Squash Classic. He followed it up by winning the Kuwait Open the same year, beating compatriot Amr Shabana in the final. Wins at the 2009 PSA Masters and Saudi International in December meant that the Egyptian star reached World No.1 in January 2010 at just 22 years of age, becoming the youngest player to do so for 26 years. It was eventual champion Nick Matthew who ended that run during the 2013 World Championship, and the Egyptian went on to be plagued by injury during the next year. 2014 Qatar PSA World Championship and completed a miraculous return to action, clinching his third World Championship title after beating compatriot Mohamed Elshorbagy in a superb final.