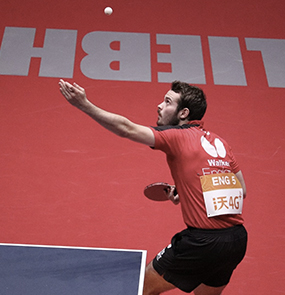 Sam has played table tennis from a very young age. His father introduced him to the sport at 2 years old, by standing him on a stool to see over the table. Sam has played for England in every age group as a junior. At 16, he got a contract with a professional club in Germany to live, play, and train there. Sam began in the fourth league in Germany and in the 7 years he's been there, he's worked his way to the Bundesliga where he's played for the last 3 seasons. For the upcoming season, Sam will play in the French first league but continue to live and train in Ochsenhausen, Germany.