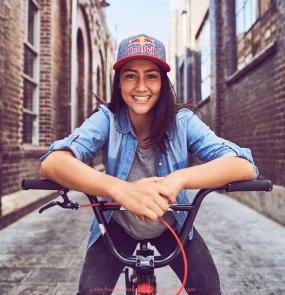 Born in Japan, Saya moved to Australia at the age of seven and having been raised in an ultra-competitive environment with her brother, Kai, who's also a pro-racer, Saya was perhaps destined to follow suit. At the age of four Saya attended practice sessions and races that Kai was involved in and her love of the sport of BMX racing grew from there. Not yet out of her teens, Saya has already amassed a seriously large haul of trophies in her 15 years of riding: four times World Champion, five times Australian National Champion and seven times NSW State Champion and counting. Of her incredible success at such an early age, she attributes much of it to her family: "My drive and discipline came slowly from many years of being pushed to my limits both physically and mentally by my Dad, brother Kai, and my coaches," Saya reveals. From the time I was young, they were the ones who knew my capabilities and pushed me to try new challenges and to keep improving. Thanks to years of this, I’ve developed my own motivation and a sense of my own abilities in order to challenge myself and improve on my own. Next stop for Saya will be the 2020 Olympic Games, for which she'll be one of the favorites for the gold medal.