Scott Brash MBE is a Scottish showjumper. Just seven years old when he began riding his first pony for him, Scott is now an Olympic Gold Medallist and in 2015 the first rider to win show jumping's Rolex Grand Slam, all three of the sport's most prestigious events in a single year, earning the sport's biggest individual prize. 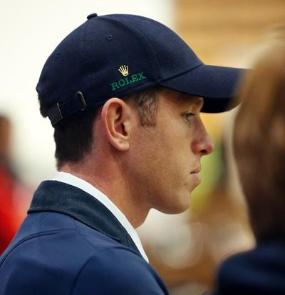 "I love working with horses and competing in the ring, I feel very fortunate to be able to do what I love and feel so passionately about every day of life"

Scott Brash has risen to the highest level of show jumping sport by way of his humble beginnings in Peebles, Scotland. Born to Caroline and Stan Brash on December 5, 1985, Brash and his older sister Lea grew up riding their ponies and spending weekends competing all across the U.K. With the discipline that always saw Scott and his siblings back home in time for school on Monday morning and talent that saw the young Scotsman accelerate quickly up the levels, Scott set off to make a go of it as a rider at the age of 16. Among his early supporters was Paul Barker of Scotland, and Brendon Stud in the U.K. By the time Scott caught the attention of his current owner Lord Harris, he'd begun to achieve international notoriety with Intertoy Z and Bon Ami. Intertoy Z, a 1999 Zangersheide gelding, carried Scott to some of the first big milestones of his career; competing in the 2010 FEI World Equestrian Games, CSIO5* Nations Cup appearances on Team Great Britain at wins at Dublin and Aachen 2011. Bon Ami, a 2001 Belgian Warmblood owned by Mrs. E McTaggart, was a strong second horse during this same time period and helped Scott begin his rise up the world rankings with top placings around the world. But of course, it was Scott's partnership with Hello Sanctos which began in a yard in Germany in 2010 that has become firmly etched in history. Owned by Lord and Lady Harris and Lady Kirkham, Hello Sanctos and Scott won their first Grand Prix together at the 2012 Winter Equestrian Festival in Wellington, Florida. Later that year they earned a Team Gold Medal for Great Britain at the 2012 London Olympics, in what is now regarded as an early achievement for this legendary pair. Scott and Hello Sanctos had a near perfect week at London 2012, jumping clear round after clear round, save for just a single rail down in the Individual Final. Scott finished 5th individually in that, his first Olympics. Scott has since ridden Hello Sanctos to team gold at the 2012 European Championships, the 2013 and 2014 Longines Global Champions Tour Series Championship, to two 2015 Longines Global Champions Tour Grand Prix victories (Miami and Estoril) and most significantly, to a historic victory in the 2015 Rolex Grand Slam of Show Jumping. This impressive accomplishment consisted of consecutive victories in the Rolex Grand Prix of Geneva (December 2014), the Rolex Grand Prix of Aachen (May 2015), and the CP International Grand Prix (September 2015), a feat that had never been achieved before. The following year, Scott once again delivered strong performances along with the 2016 Rolex Grand Slam series marking yet another historic win in the $3,000,000 CP International Grand Prix aboard Ursula XII. That day on September 11th, Ursula XII jumped to her first Grand Prix win and helped Scott to secure the biggest prize check in show jumping history. Queen Elizabeth appointed Scott a Member of the Order of the British Empire in the 2013 New Year Honours for services to equestrianism. He now proudly holds the title of MBE and was further honored in 2015 by being inducted into the British Horse Society Equestrian Hall of Fame, for having achieved the Highest Distinction in the field of Equestrianism. Scott held the position of Longines FEI World Ranked Number One show jumping rider nearly consecutively since November 2013 and remains in the top 10 ranked riders in the world today.