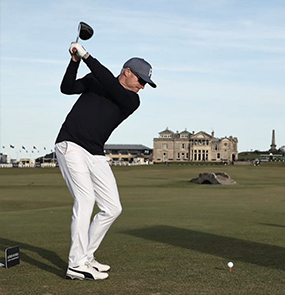 "The want and the will to get better inspires me. I always say it's the most addictive game on the planet. I always wanted to play on the European tour and I wanted this to be my living, so that’s what's always strived me to get better."

A six-time winner, Simon Dyson has been a mainstay on the European Tour for nearly two decades. With two titles a year in 2006, 2009 and 2011, Simon reached 26 in the Official World Golf Rankings and played at The Masters in 2010 and 2012. Simon is a born and bred sportsman. His grandfather and father were a jockey and bookmaker respectively, while his uncle played in Tottenham Hotspur’s double-winning team in 1960-61. A promising footballer on the books of York City and Scarborough as a teenager, the early indication was that Simon would follow in his uncle Terry’s footballing footsteps. However, he was encouraged to take up golf by his brother, Nick, and by the age of 16 had achieved a scratch rating. Simon’s golfing career began to flourish in 1999. He was runner-up in the English Amateur Championship, won the Finnish Amateur title and was a member of the Great Britain and Ireland side which won the Walker Cup at Nairn. He turned professional in September of that year. The Englishman won the Asian PGA Tour Order of Merit, Player of the Year and Rookie of the Year in 2000, clinching three titles along the way. His breakthrough on the European Tour came in 2006, with victories at the Enjoy Jakarta HSBC Indonesia Open and the KLM Open. Simon returned to the winner's circle in 2009, taking the KLM Open for the second time in his career before sealing an emphatic three-shot victory at the Alfred Dunhill Links Championship courtesy of a final-round 66. His next title came at the Irish Open in 2011 before another triumph at the KLM Open, where he joined the illustrious company of Seve Ballesteros and Bernhard Langer as the only three golfers to have won the title on three occasions. The Yorkshireman found form again in the 2014 season, with top-five finishes at the Alfred Dunhill Championship, the BMW PGA Championship and the BMW Open, as well as second place at the KLM Open but struggled with his fitness throughout 2016.