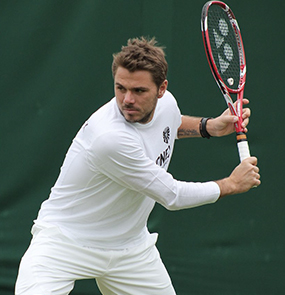 The Swiss-born Stan Wawrinka is renowned for his serve and backhand with clay being his preferred surface. In January 2014 he reached a career-high, gaining the world No. 3 ranking. His career highlights include 3 Grand Slam titles at the 2014 Australian Open, 2015 French Open, and 2016 US Open, where he defeated the No. 1 player in the final on all three occasions. He reached the final of the 2017 French Open, winning an ATP World Tour Masters 1000 title at the Monte-Carlo Masters in 2014, and reached three other finals in Rome 2008, Madrid 2013 and Indian Wells 2017. He is sometimes considered as part of the newly-established "Big Five" an expansion of the Big Four of Roger Federer, Rafael Nadal, Novak Djokovic, and Andy Murray.