One of the best climbers in the world and Red Bull White Cliffs Champion.

Achieved podium position 4 times at the World Ice Climbing Championships, won the Redbull Whitecliffs climbing competition in 2015, climbed Interstellar Spice and The Path in 2016, established some of the most challenging climbs in Cuba, Mongolia and Wales, and made the first ascent of Muy Caliente the first E10 in Wales. 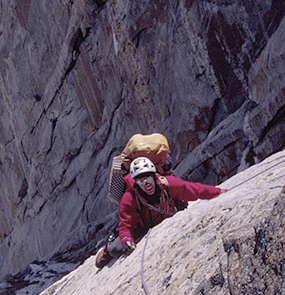 "Life is about the experiences you have before you die. Make the most of your opportunities and pursue dreams that may seem unreachable."

Tim is a professional athlete who has appeared on numerous BBC programs. In October 2015 he won the Redbull Whitecliffs climbing competition on the Isle of White, and in February 2016 he climbed Interstellar Spice, the first Ice Climb in the world graded WI 12 at Helmcken Falls, Canada. In August 2016 he climbed the scary and runout traditionally protected climb The Path 5.14R (8b+), in Lake Louise, Canada. More recently in 2017 he repeated Superman 5.14c (8c+) in Squamish, BC, Canada. As a pioneer he has also established some of the most challenging climbs in Cuba, Mongolia and Wales. An author, speaker and wingsuit pilot, he works closely with Mountain Hardwear design team and continues to push the boundaries of physical and mental performance. On his first Himalayan trip in 2006 with Ian Parnell, Tim climbed a new route on the East Face on Kedar Dome (6840M) free, in Super Alpine style, and nominated for the Piolet D’Or (climbing’s equivalent to the Oscars). Tim achieved podium position 4 times at the World Ice Climbing Championships. In 2010 Tim made the first ascent of Muy Caliente the first E10 in Wales. Tim enjoys many other sports including Skiing, Snowboarding, Free Diving, Skeleton, Bobsleigh, Kiteboarding, Mountain Biking and Heliboarding. Tim is the Patron of the Charity “Breathtakers” and graduated with Marine Zoology.

Starting by being helicoptered to the base camp of the Yukon in a remote alpine setting, Tim describes as the most majestic and impressive base camp in the world. You will climb for 2-3 days with at least one night sleeping on the wall, depending on the weather.