British rackets player, winner of the Canadian Open in 2015, world ranked No.3 and current UK No.1. 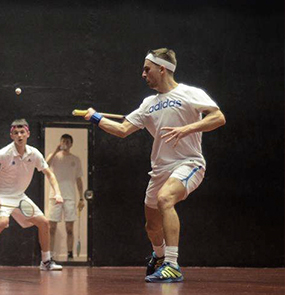 Tom is a 25-year-old rackets player and currently has a Singles World Ranking of #2 and a doubles World Ranking of #1. He started his career at Haileybury School and then progressed to Reading University where he combined his studies with coaching at Wellington School for 3 years. Tom then spent a year during the 2014/15 season playing full time in North America, mainly based at the Racquet Club of Chicago. Rackets is the forerunner and the original game behind squash. It's played mainly in North America and also in the UK. It's the fastest ball game in the world with the ball (similar to a golf ball) travelling upwards of 180mph. The home of rackets in England is at The Queen's Club, London. Whilst it is a small sport in terms of participation, it is played at a number of high profile private clubs. Tom bases his training out of The Queen's Club while also occasionally coaching at Tonbridge School, Haileybury, and Wellington. He is the current holder of the British Open Singles and Doubles titles, the US Open Doubles title, the Manchester Open title, and the UK Invitational Singles title (round robin tournament for world’s top 8, similar to the Tennis World Tour Finals). In previous seasons Tom has also won the US Amateur Singles, the British Amateur Singles & Doubles, and the Canadian Amateur Singles. He recently competed in the two-legged Singles World Championship Challenge match in NYC & London (against the current World Champion James Stout from New York) and has qualified to play in the Doubles World Championship Challenge which will take place in November again in New York and at The Queen's Club in London.