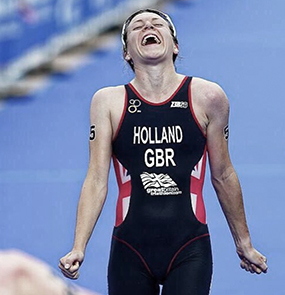 "It's amazing what you can do, when brave enough to keep putting one foot in front of the other."

Vicky Holland is an Olympic bronze medallist and World Champion triathlete. In 2012 Vicky became a World Champion as part of the British Mixed Team Relay squad then repeated this feat in 2014. The 2014 Commonwealth Games was a decisive turning point as she secured her first major individual medal with a bronze and bettered that with a gold in the Mixed Team Relay. Vicky stepped up even more in the 2015 season proving she is one of the world’s best. She has secured two individual wins on the ITU circuit, one in Cape Town and one recently in Edmonton. Along with these impressive wins she has consistently achieved podium finishes throughout the season with a crucial 3rd at the Grand Final in Chicago, which secured her place at the Rio Olympics where she brought home a bronze medal, an incredible achievement. These consistent results meant she became World Triathlon Champion in 2018.