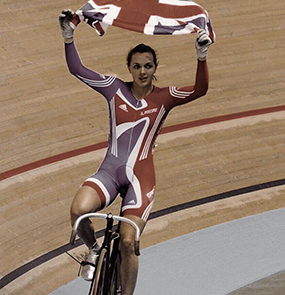 "Forget about the outcome and focus on the process"

Victoria Louise Pendleton CBE is a former track cyclist who specialised in the Sprint, team Sprint and Keirin disciplines. Pendleton represented Great Britain, winning 9 World titles, including a record six in the individual Sprint competition, dominating the event between 2005 and 2012. Pendleton is a former Olympic, European and Commonwealth champion. In 2012, she won the gold medal in the Keirin at the 2012 Summer Olympics, as well as silver in the Sprint. She was appointed Member of the Order of the British Empire (MBE) in the 2009 New Year Honours and Commander of the Order of the British Empire (CBE) in the 2013 New Year Honours for services to cycling. As a gold medalist at European, World and Olympic level, Pendleton is also a member of the European Cycling Union Hall of Fame. With two gold medals and one silver, Pendleton is one of Great Britain's most successful female Olympians.