First man to dive the Arch, in the blue hole of Dahab, Egypt, traversing a 30-metre long passage at 60 metres of depth, on a single breath of air, without fins or other propulsive equipment. The holder of the Variable Weight World Record: 145m of Depth and the Classic Constant Weight World Record: 94m of Depth. 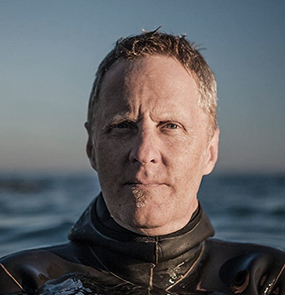 William’s journey into Ocean Exploration started as early as his toddler days with his father who taught him how to dive and respect the sea, followed by his first encounters with sharks as a young adult. Many years later, he discovered the competitive sport of freediving and quickly became part of the elite, earning championship titles, setting countless Pan American and world records. A natural born explorer, he also set a historic record on June 1st, 2007 by becoming the first man to traverse a 30-metre long passage at 60 metres of depth known as the Arch in the blue hole of Dahab, on a single breath of air, without fins or other propulsive equipment. After three years of competitive freediving, William started lending his breath-hold diving skills to a meaningful cause, ocean conservation. William has since founded the Watermen Project, an NPO dedicated to ocean conservation through education and has been named Ocean Ambassador of the IUCN (International Union for the Conservation of Nature). A Fellow International of the Explorers Club, William leads expeditions to remote regions of the world’s oceans and has been organising bespoke expeditions for clients who share his passion and love for the sea for more than ten years. Explore the bountiful marine life in remote archipelagos and coastal regions and dive with large marine predators such as sharks, whales, dolphins, sea lions, manta rays, dugongs to only name a few. With William’s expertise, there is no place on the planet that you cannot explore.

Cold water diving in Greenland takes place in clear waters with icebergs, historic shipwrecks, strange plant life and action-packed dives at the mouth of a fiord or bay.

Vamizi Island offers the very best diving on the planet. The shores of Vamizi Island are home to some of the healthiest and most pristine reefs in the world, which support over four hundred tropical fish species. You will get the opportunity to swim with Gray Reef Sharks, Turtles, Barracuda, Hammerhead Shark & Batfish.


Diving with William Winram in Tonga

Immerse yourself in an experience of unparalleled free diving. From Humpback Whales to Bull Sharks, the Sea of Cortez in the La Paz region of Mexico offers the chance to dive alongside some of most incredible marine wildlife, in one of the most luxurious, exclusive locations on the planet.