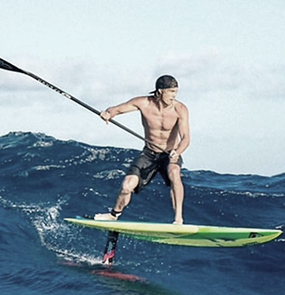 "Those hours spent training, working on equipment, checking forecasts, sleeping on planes, that one moment on the wave makes it all worth it."

Jamie Mitchell might be more comfortable on water than he is on land. He has forged a reputation as one of the world’s elite ocean athletes, a world champion open ocean long distance paddler, a notorious big wave surfer, a record-breaking stand-up paddle boarder and an international swell chaser - no one label adequately describes Jamie Mitchell. He is renowned for being the big-wave charger, happily paddling into massive waves at locations such as Mavericks and Jaws. Jamie’s success, however, is not limited to big wave surfing. He has won virtually every major paddling race in the world, including the Molokai 2 Oahu Paddleboard World Championships, a 32-mile race, 10 times. Australian born and raised and recently relocated to Hawaii, the opportunities to surf with Jamie are endless. From exploring the remote Islands in Indonesia and Fiji that host the world’s most coveted, private waves, to heading out on a jet-ski in pursuit of the some of the best breaks on the North Shores of Hawaii.

Surfing with Jamie Mitchell on the North Shore of Oahu, Hawaii

The mecca for surfing, luxurious, beautiful with world class waves everywhere. Go to Jamie Mitchell’s home town and experience highest standard of waves this planet has to offer. Jamie will take you out on his jetski to the big waves he is famous for riding and you can surf them too. Visit the exclusive Quiksilver house to watch the Pipeline reef break.

Remote, exclusive, private islands for adventurous surfers in the southern Indian Ocean. The Mentawai Islands offer some of the best surf to be found anywhere in the world. Improve your surfing by following a bespoke pre-trip training plan to make sure you are at your peak of fitness and wellbeing when you arrive and enjoy 1 on 1 coaching with the World’s best Big Wave surfer Jamie Mitchell who will ensure your surfing skills improve throughout the trip.

Extremely remote, private island for adventurous surfers in the southern Indian Ocean. Nihi Sumba island is host to one of the world’s most coveted private waves. Known as ‘Occy’s Left’. Popular for its character, the wave offers 200m to 300m long and often thrilling sections of ripple walls and heaving barrels. With surfers on the wave being limited to 10 per day, there really is no other wave in the world like it.

Escape to your very own heart-shaped private island of Tavarua for surf that is truly world class. With seven breaks nearby including world-renowned Cloudbreak, this remote private island offers the opportunity to escape the rest of the world and immerse yourself in your passion for surfing.