Canadian-born, Maui-raised, Paige Alms is the top female big-wave surfer in the world for a second year in the row. Historically dominated by men, Paige is carving a new path for women in big-wave surfing and is currently on the hunt for qualification in the 2020 Olympics. 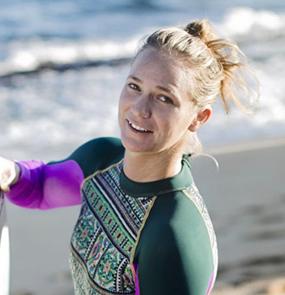 "You can manifest everything you want in your life, you have to believe it is possible and then create it!"

Paige Alms, born in Victoria, Canada, moved to Maui when she was 9 and grew up enjoying the beautiful waters on the north shore of the island. While many know Paige for her most recent achievements, she has been a competitive surfer since she won her first US National Title at 13 and is currently a member of the Canadian National Surf team and is competing in the ISA World Games and Pan American Games in hopes of qualifying for the 2020 Olympics. Paige is 30 years old, a Patagonia ambassador, organic gardener, animal lover, fitness and fun addict, and travels the world in search of perfect waves during the summer while spending the winter at home on Maui. She loves being involved with the next generation, running surf camps and doing motivational speaking and hopes that what she is doing will help inspire others to live their dreams.


Surfing with Paige Alms in the Marshall Islands

Stay in the brand new, and only lodge on Beran Island designed by Surf visionary Martin Daly. Beran is truly central to all the surf in the atoll, and you can see the two most consistent breaks from the island's new and only lodge. It's a typical atoll sand island covered in coconut palms with many substantial hardwood trees as well.