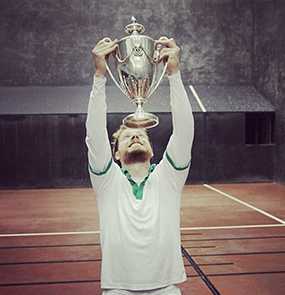 "Always remember that no matter what anyone says, if you believe in yourself and your dreams, you can accomplish anything."

Having been introduced to the game aged 5 in Charleston, South Carolina, he played his first tournament at age 7. During his early teens Camden competed as a top-level amateur, winning such tournaments as the US Amateur and the Tuxedo Gold Racquet. In May 2005, at age 17, Camden moved to the UK and turned professional, working at Hampton Court Palace under Chris Ronaldson. After a year in the UK, Camden returned to the US and became a touring professional based out of Newport, RI. From 2006-2008 Camden trained in Newport under coach Josh Bainton, and continued to rise up the ranking, until finally reaching the ranking of #5 in the world in 2008. This allowed Camden to qualify for the World Championship Eliminators, where at the age of 20, he defeated the other top 4 players in the world, and qualified to challenge for the World Championship being narrowly defeated by Rob Fahey 7 sets to 5. In September 2008 Camden joined the team at the Tennis and Racquet Club, Boston, as a real tennis, racquets, and squash professional. Over the next three years Riviere would continue to rise in the rankings to #2 in the world, and won his first major tournament, the U.S. Open, in Philadelphia on March 1, 2009. In November 2011, Camden returned to being a touring professional based out of Charleston, South Carolina. Since returning to a touring professional state Camden has accumulated a mass of titles and in September 1, 2013 became the #1 ranked player in the world. Since the world ranking system was created in 1991, no American had been ranked number one in the world. Rob Fahey had been number one for the past twenty years, but in late August 2013 Riviere passed Fahey.

The Tuxedo Club is a distinctive social institution that, since 1886, has provided its members, their families and guests with recreation and refuse in the close environs of Metropolitan New York City. Camden Riviere provides access to this alluring venue for rackets combining the opportunity to enjoy the sport with the world?s no.1 whilst soaking in the luxury that comes with access to such a prestigious venue.

The Château de Fontainebleau hosts a court originally built under Henry IV and rebuilt in 1732. Play against the world no.1 on one of the most authentic and original courts in the world.